Cafe: Puppetmaster! It’s a sincere pleasure to speak with you again. I hope the last year has been treating you well!

Before anything, I wanted to congratulate you on your Ukraine relief drive from March. That was a really awesome thing you did and I’m happy it was so successful!

Puppetmaster: Thanks a lot, nice talking to you again, too.

I think it’s really important to help people in Ukraine, but not only them. I recently had a discussion with a friend who said “And now all of a sudden everyone starts donating and being a ‘good person’. Screw that: I never donated and will never donate. To anyone”.

I then told him that I did not start with Ukraine: I have been donating for all kinds of stuff all my life. Even if it’s just a couple of € every now and then, there are always people; animals, and environments that need help. And it´s important for me to live by example. I don’t usually mention that, but I tried to change his mind. It might have worked. I am not sure, but I won’t touch that topic again. I also don’t want to go into a political discussion, for me it was just important to also help and keep helping.

Cafe: Yeah, I absolutely agree. Helping people doesn’t have to be political!

Now, you’ve been doing a ton of technical work over the past few months. It’s an open ended question, but what’s been going on?!

Puppetmaster: So yeah, we have been focusing on getting more and more stuff done for the pose viewer. I am currently preparing all the customization assets for the girls. We have 103 different assets per character and they all need to be cleaned up, skinned, exported to unreal, imported there, shaders set up and assigned, and implemented for customization.

This time, people will have much more freedom about changing the look of the assets. Not only the color, but also the “shininess”  So you can make it look super dry (like cloth fabric) or super shiny like latex. And anything in between. And we will also have that for the skin of the characters. So you can actually make them look 100% metallic.

Colors will vary, but this is just to see what we have. 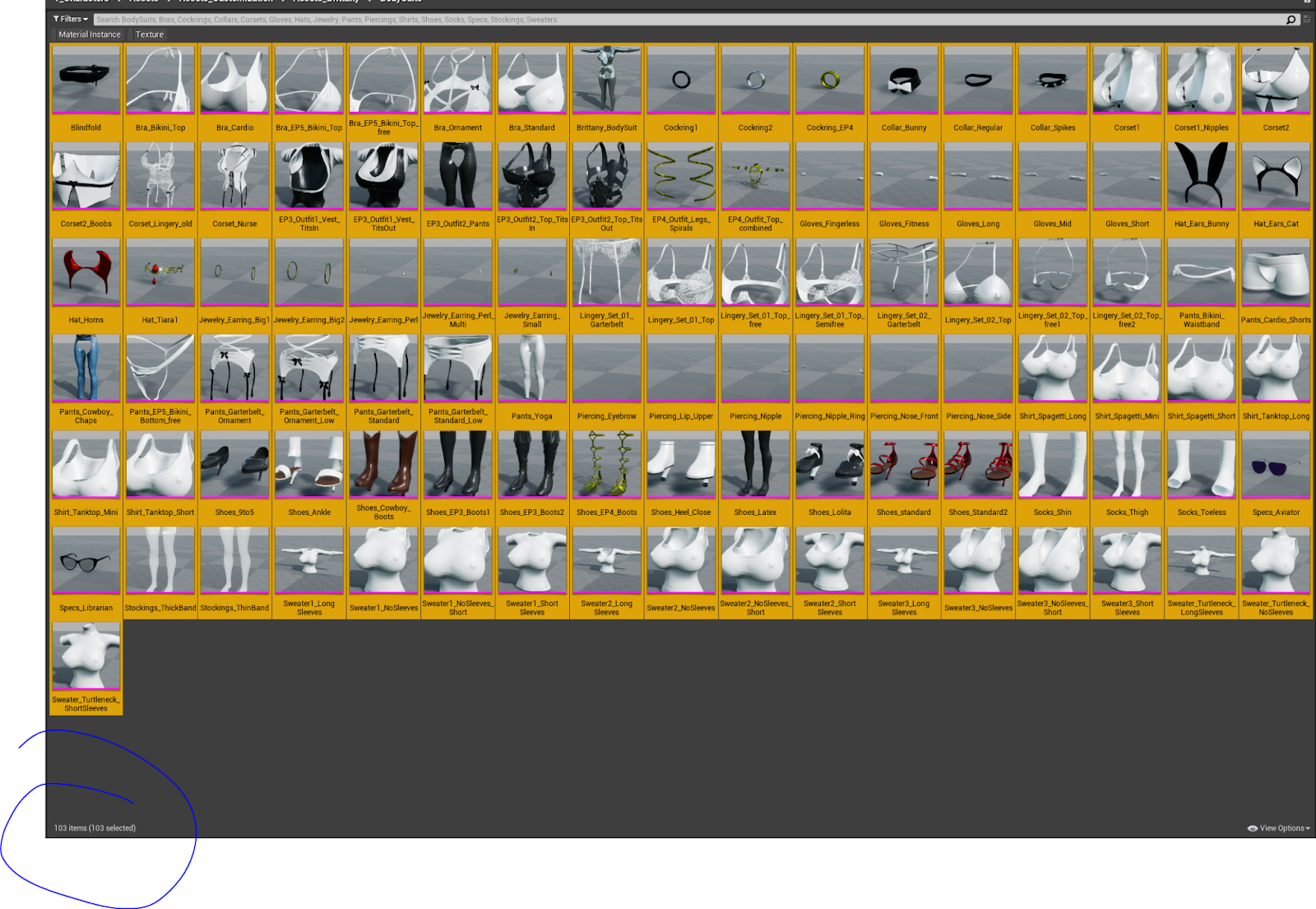 We also improved details and have some new assets, like proper stockings. (I LOVE stockings) We also just recently released PoseViewer 1.9 with a Guest-Login where you don´t have to register anywhere and you can play the demo part instantly. You can grab it here.

[We’ve also added POV cameras to each pose. It´s amazing!  You can watch a video here. 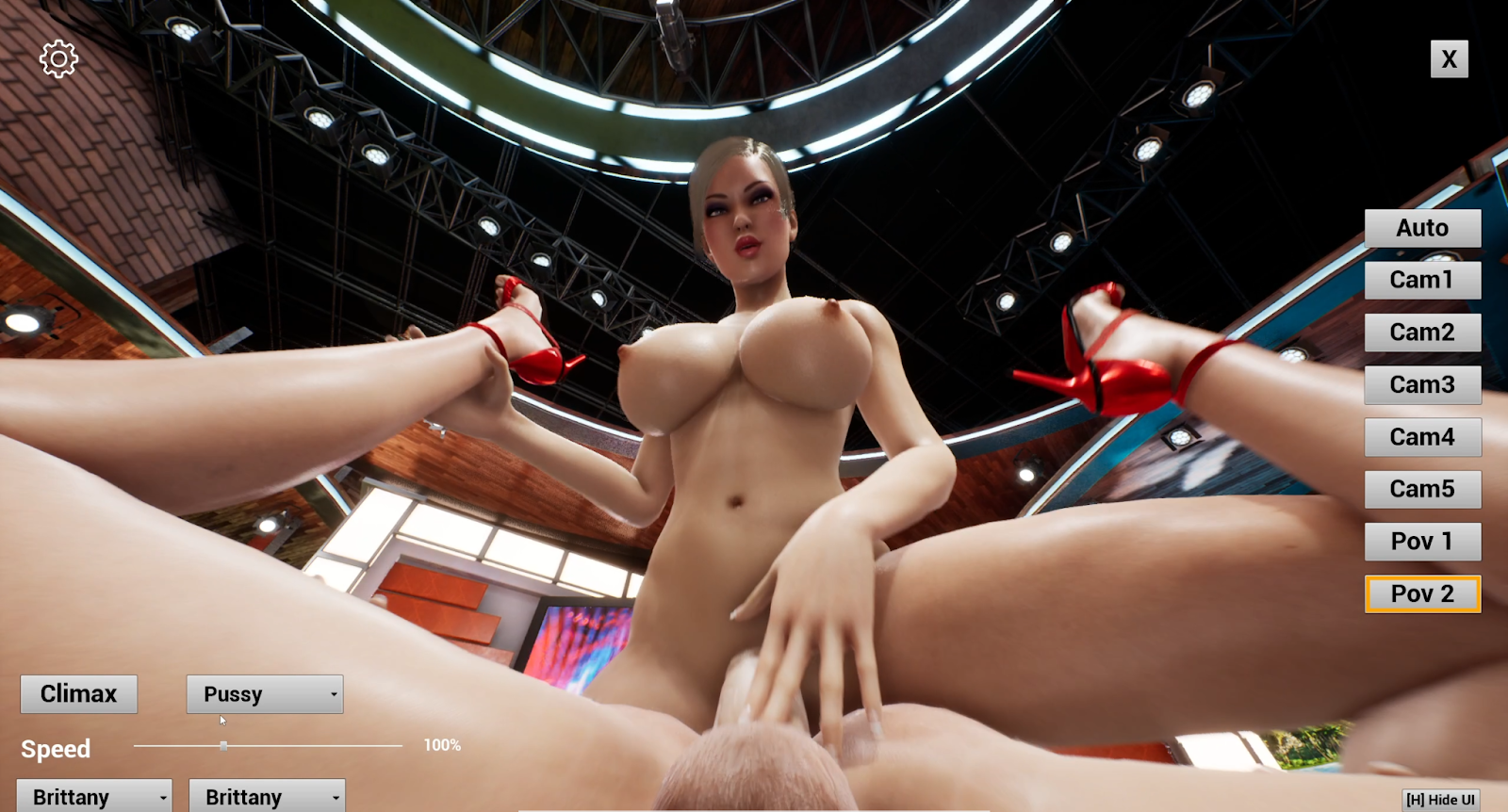 We plan to have both the customization and the initial version of the Cum-System implemented in the next 1-2 releases. Ideally the Poseviewer is feature complete in June and then it´s simply adding more and more poses over time.

The idea of the PoseViewer initially was, to have a very simple scene (we now have 6 environments) and dynamically loaded poses from a server. It somehow grew a bit bigger, but that´s ok.

So, with having the poses stored on the server, you don’t have to download everything from scratch, but only the poses you want. That already works, but since we constantly add features, you still have to download the whole package.

Oh, and in case you have it already, you need to delete the temp files it creates in previous versions. So every time you get a new version, please delete the old temp files first. Here is a link for how you do that.

We’ve also started with the first MotionCapture sessions for the Story-Elements of Episode 7, Which is planned to be released late Summer.

Last but not least: all the girls will have all the customization assets available. Trinity’s outfit from Episode 3 was especially requested many times to be available for the other girls. We did not have it before, but now, everything is possible. Cafe: That is an overwhelming amount of development! Just…wow!

You pretty much answered anything I would have asked, haha. My head is still spinning from all the info.

Really, this is the only other question we had, and of course, we understand if it’s a secret: what kind of scenes can we expect in the next part of sensual adventures? We’ll take any tidbit!

Puppetmaster: So all I can say is that the next Episode will be a prequel to EP1. So, we see Brittany & Trinity in their first adventure shortly after they met. That´s all the info I can give.

Thank you so much for your time, Puppetmaster: keep on crushing those development goals!

Puppetmaster: Thank you. It’s actually a bit “weird” to get an outside point of view. For us it’s just “yeah, we are working our way through” and we don’t realize how much we’ve actually achieved in the past few months. It feels good to realize that  For me, it’s always “it’s not enough, I need to do more!”. But now that you say it, it’s actually really quite a lot, so thanks for your kind words and encouragement!

Puppetmaster isn’t just making animations, they’re contributing to the future of the futanari genre! If you want inside info on updates, previews and even free animations, go support their patreon page for goodness sake! You can also check them out on good ol’ twitter! We need to keep this futa train moving!